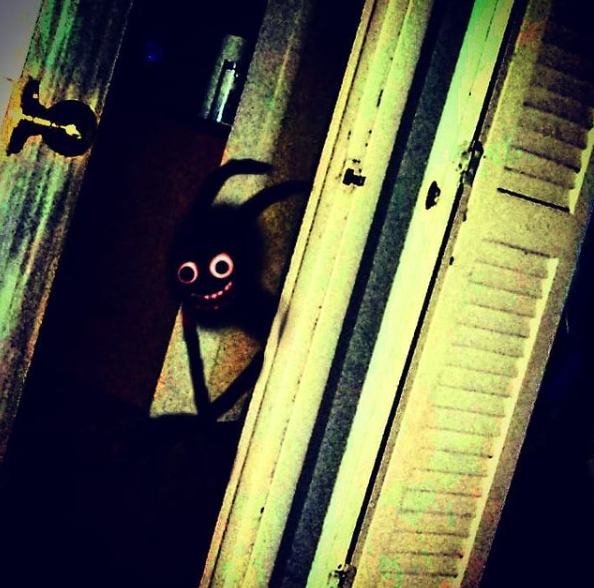 There's a cabin in Maine that's home to four people with shared experiences. A fifth stops by occasionally, but does not live there.

The tenants of this cabin are listed:

Daniel Jackson was 22 years old when he died. When he was alive, he had a wife and two kids. His co-worker, Peach, had a crush on him. They ran a shop together that sold "magical and anomalous" items. Sometime in 2018, Peach found an area in the woods behind Daniel's therapist's office that made her hallucinate people without eyes. She showed Daniel the place, and they explored it together. She eventually got too freaked out and ran away, leaving Daniel there all alone.

Daniel got lost in this place, and died. In Hell, he made a deal with Lucifer to bring him back to life and make him immortal, all for the cost of his soul and his ability to see. He now roams every dimension and realm selling anomalous objects, mainly living in our own. He runs a small shop in Maine where he sells the same anomalous objects he normally does. He is close to Ava and Cody.

Cody Meadows has been a sleeper proxy of a Nightmare since WW1. He was initially used when the creature wanted to inflict harm on certain humans for fun. It would make Cody inhabit the body, and intentionally breathe in gaseous chlorine. Though, since major wars like that have stopped, Cody is now using Othi's body. The creature, Cody's master, will make Cody inhabit Othi during chemistry classes to learn more about chemicals and reactive elements.

Toby R Willow has been a berserker proxy of a Nightmare since he was 15. When he was 14 years old, his father was texting and driving while his whole (direct) family was in the car. This resulted in a serious accident, killing Toby's father, mother, and sister. He was left to live with his 20 year old brother. Toby's brother was not the best person to live with. As a trans man, Toby couldn't have any peace living with a transphobic asshole such as his brother. Toby tried to reach out for help, but no one believed him.

When Toby turned 15, he had enough of the bullshit he was putting up with. At first, he stopped taking his medication. Then, he decided to run away from home. He ran into the woods as far as possible. After his first night of living in the woods, he began getting hallucinations of his dead family members. They told him to follow the trees. The trees had their arms outstretched so Toby knew where to go, and when he got off trail, they would grab him and put him back. After walking for what seemed like weeks, Toby found himself at a cabin that looked fairly big enough for a small family. A man with many cloudy eyes was sitting in the living room, and invited Toby in. He now lives in the cabin with the rest of his new family. He is close with Daniel and Cody.

Ava Williams is a revenant proxy of a Nightmare, and has been since maybe February of 2020. Her revenant form resembles Baphomet, except without wings. She used to run a Homestuck fan blog on Instagram, but it soon turned into a journal when her life was flooded with monsters. She eventually got fed up with fighting back and just gave in. After that, she went to live with Daniel, Toby, and Cody.

Her connections to Scarlett and Travis are probably what caused the sudden influx of monsters in her life. Alex and Alessa are being saved for later. They need time to be hollowed out.